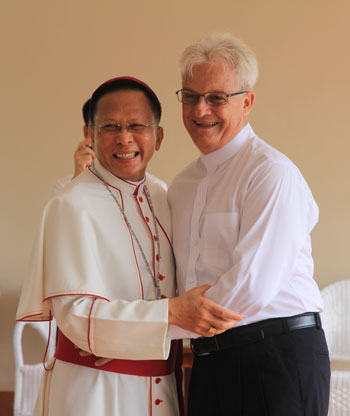 About 250 people gathered recently in Nong Bua Lamphu, Thailand, for a joyous celebration with Br Damien Lunders SVD as he marked his Golden Jubilee of taking vows as a Divine Word Missionary.
SVD Australian Provincial, Fr Tim Norton, and Fr Jim Knight were also among those who celebrated the milestone with Br Damien.

Bishop Joseph of the Udon Thani Diocese presided at Mass and also blessed the new SVD house which has been built in Nong Bua Lamphu, in the North-East of Thailand, as well as a shrine dedicated to the Blessed Virgin Mary at the parish of St Michael the Archangel.

After Mass, the guests stayed on to talk and share local food and watch the children from the Mother of Perpetual Help Centre perform dances from the local Issan culture. Br Damien is the Director of the Centre, which supports adults and children living with AIDS.

Looking back over his 50 years of ministry, Br Damien says that he came from a family where religious vocations were plentiful. The religious influence continued when a long-time school friend joined The Divine Word Missionaries at Techny, Illinois as a Brother Candidate, completing his schooling there.

“By the time I graduated from high school I became familiar with the brotherhood through him and decided that is what I wanted to be as well,” Br Damien says. “So after high school, in 1960, I entered the SVD at Techny.

After taking perpetual vows in 1969, Br Damien received a mission assignment to Goroka in Papua New Guinea where he spent 15 years as financial administrator for the Diocese. Following a four year return to the Mission Office in Techny, he returned to PNG for another 10 years.

A chance conversation with Br James Wilkins alerted Br Damien to the need for volunteers to work in Thailand at an AIDS hospice and after an initial visit to a centre in Bangkok, the Bishop ofUdon Thani Diocese, Bishop George Phimphisan CSsR, invited the SVD to come to his Diocese.

Following some negotiation with SVD superiors and the Diocese, Br Damien and Br James were given the green light to go to Thailand in 1999. They spent a year learning the difficult Thai language in Bangkok before travelling to Udon Thani where the Bishop assigned them to work at Mother of Perpetual Help Centre in Nong Bua Lamphu.

“At that time the centre was merely a rented house were people with AIDS could come for counselling,” Br Damien says. “The first two years were spent primarily visiting people with AIDS and realising the real needs of the Centre.

“We started on a small scale, giving aid to needy children of HIV families, forming HIV groups throughout the province and keeping in regular contact with the people in these groups.”

They developed AIDS education and awareness programs for young people in schools. Now each year, the Centre concentrates on delivering these programs in one District, with up to 25 schools taking part.

The team at the Mother of Perpetual Help Centre also worked with the local community to initiate self-help development programs such as the very successful cattle project and another to provide food and milk support to babies and young needy children, as well as school supplies and education support to 400 children of HIV families, some of whom are HIV positive themselves.

“The Centre would have been closed had not the SVD come to look after it because the Diocese had difficulties finding financial support to keep it running,” Br Damien says.

According to Br Damien, the work in Thailand (part of the SVD AUS Province), with the poor and people affected by AIDS is both challenging and rewarding as he tries to bring the love of Christ to each person to whom he ministers.

“I think I try to do that just by being available to all people in need,” he says. “Helping in little ways of kindness and patience; just trying to treat them as any individual, trying to show others that persons with aids are no different from themselves and that there is no need to fear them because of their illness.

Reflecting on his 50 years of SVD ministry, Br Damien says he has much for which to be grateful.

“One of the things I love about being an SVD brother is the internationality of our Society – how we can live and work together for the same end, not only with our SVD confreres, but with our Sisters (SSpS) also as part of the SVD family,” he says.

“I love having been given the opportunity of living and working with the poor and marginalised both in Papua New Guinea and now for 13 years in Thailand.