The Divine Word Missionaries are engaged in a range of ministries in Melbourne, including the formation of SVD missionaries at Dorish Maru College, the pastoral care of the Parish of Sacred Heart, Preston, and the fostering of spirituality at the Janssen Spirituality Centre, Boronia.

Dorish Maru College is the formation house for students who study for the brotherhood or priesthood of the Society of the Divine Word.

Students in formation fulfil the requirements in philosophical, theological and pastoral studies at the nearby Yarra Theological Union (YTU).

The college is also home to professed members of the Society who teach at the YTU in their particular areas of expertise, which include Missiology, Scripture, Anthropology and History. Other professed SVD members live at Dorish Maru and are engaged in various ministries, including serving the pastoral needs of the formation community and helping out in pastoral supply work in nearby parishes. They celebrate Masses, give biblical homilies, administer the sacraments, give retreats, engage in inter-religious dialogue, and chaplaincy. The current rector of Dorish Maru College is Fr Michael Knight SVD.

In addition to their studies, the students also engage in various ministries, including visiting the sick, helping provide food and friendship to the homeless, helping migrants improve their English or assisting refugees to solve their problems, as well as providing spiritual assistance to seafarers passing by Melbourne’s port.

Every year, the Dorish Maru College reaches out to members of the local community by inviting them to take part in Mission Day activities. This will often include a guest speaker on some aspect of Mission, followed by Mass and a meal together.

Community life is an important feature of Dorish Maru College. Though the members of the community come from diverse cultural and various national backgrounds and are also of different ages and personalities, they strive to be of one heart and one soul (Acts 4:32a).

“In the spirit of the early Christian community, we devote ourselves to apostolic teaching and fellowship, to the breaking of bread and the prayers.” (Acts 2:42)

Dorish Maru College was named to commemorate the priests, brothers, sisters and lay missionaries who lost their lives on a ship off Papua New Guinea during World War II. On February 6, 1944, the Japanese ship ‘Dorish Maru’ was strafed by American planes off Wewak, PNG. Among those killed were seven Divine Word Missionary brothers and 27 Holy Spirit Sisters.

The Janssen Spirituality Centre in Boronia is an initiative of the Society of the Divine Word, together with the Holy Spirit Sisters. The Centre is rooted in the Catholic tradition and is named in honour of St Arnold Janssen, whose dream of a united world moved him and his followers to reach out to people of all cultures and spiritual traditions. The Director of the Centre is Fr Thien Nguyen SVD.

The Centre, formerly the site of a contemplative community of the Good Shepherd Sisters, has been a place of prayer and relaxation since its foundation. It has a living tradition of being a place for spiritual retreats and personal renewal. For many years it was known as 'Karuna', a place of loving kindness and active compassion. This tradition continues as a central focus of the Janssen Spirituality Centre. The Centre hosts a range of activities, including Centering Prayer, Lectio Divina, and Yoga-Christian Prayer. The Centre is in the process of renewing its original vision of being a centre for inter-religious and cross-cultural relations. 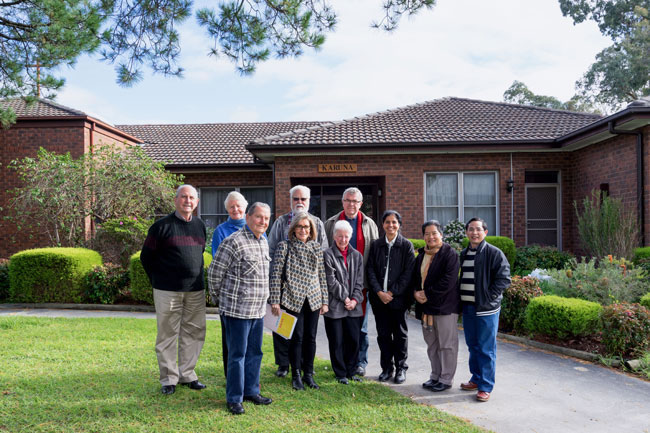 Sacred Heart Parish is located in the northern region of Melbourne. Originally it was home to the Wurrundjeri people, some of whom still live in the area, sharing the land with neighbours of Anglo-Irish, Italian, Chinese, Lebanese, Greek, Vietnamese, Somali, Indian, and Sri Lankan descent; to name just a few of the different ethnic group represented in the Parish.

Regular mass goers (based on a census conducted in May 2014), number 580 each weekend.

The Parish has a Primary School (Sacred Heart Primary) and a campus of a boys’ High School (Parade College). The Parish also hosts Spectrum (an aged care centre), Samaritan Inn (a womens’ refuge), as well as the largest Pensioners’ Club in Australia.

The St Vincent de Paul Society actively supports families living in the local area and the Legion of Mary is involved in a number of ministries, including visitation in the local Nursing Home.