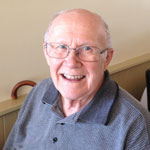 The Gospels show Jesus teaching the people of His time about His Father using parables, stories, and metaphors that they were very familiar with.  He talked about the world around them (birds of the air, flowers of the field, vineyards, sheep), about the kind of people they would know (the Samaritan, the poor widow, the sower of seed, the shepherd) and the experiences they could identify with (a widow and an unjust judge, the ruler giving a banquet, virgins waiting for the bridegroom).  In today’s Gospel He talks about the vineyard, the vine, and the vinedresser.  Even if all the people who listened to Him were not owners of a vineyard they certainly knew the world He was talking about.

But I am a city boy, grown up in Chicago.  I never saw, let alone entered, a vineyard until I went to Europe to study after ordination.  My knowledge, limited as it was, came from the Scriptures.  In the Gospel today Jesus talks about the vinedresser (God) who prunes the vine so that it may produce more fruit.  And as long as the branch remains attached to the vine it will produce an abundance of fruit.

I can remember as a novice learning for the first time what pruning really meant.  We had a Nursery across from the Seminary and in early June we would go there to “prune” the peonies.  We were told to break off the smaller buds so that the large buds could develop into beautiful flowers.  There really was nothing “wrong” with the smaller buds; they just had to die so that the one flower could fully develop.

So when Jesus said that the vinedresser would prune the vine so that the fruit might be more abundant I thought: that must also apply to me.  I was young then and wasn’t sure what this pruning process would mean.  All I knew was that it sounded painful.  As the 65 years have passed since I had that realisation I can now look back and see that God was really pruning me at times so that I could be more fruitful, but it was painful at the time.

I have often told the seminarians that the greatest blessings that have come into my life have come under obedience.  When I was ordained I requested to go to Japan.  The Superiors said “no” and sent me to Rome.  When I wanted to do my doctoral studies I asked to go to a University in the U.S.  They said “no” and told me to go to Cambridge, UK.  After teaching in the Philippines for a short stint I asked to be assigned there.  They said “no”; you are needed in Chicago.  When I was invited to take up a post in Cambridge, they said “no”; it is not our ministry.  When I was asked to come to Australia 25 years ago and said to the Superiors I would be happy to take up the invitation, they said “Fine.  We already said ’no’ to you four times when you tasked to go elsewhere; do whatever you think is best for you.”  I can look back now and say the “no”s were a painful pruning, but they resulted in my having enriching experiences that I never would have anticipated.  I think that is what Jesus was trying to tell me in this teaching.  Do not be afraid of being pruned.

The second thing that He said was that as long as we stay “attached to the Vine”, i.e. attached to Jesus, we will bear abundant fruit.  This saying reminded me of the many wonderful people I have known who were indeed “pruned” but who then produced “abundant fruit”.  A priest in the class below me was a very talented man in so many ways.  He worked in Papua New Guinea for many years and did wonderful work.  He was brought back to the United States to head our Mission Office.  Within a few months of his return he developed bone cancer.  For the six months before he died he was in terrible agony.  They had to strap him down in bed because every time he moved new bones would be broken.  But he never stopped ministering to people.  Nurses, doctors, hospital workers, visitors were constantly coming to him and gaining from him strength, comfort and wisdom.  I often thought that in those last six months he probably did more pastoral work than he did in all his years in Papua New Guinea.  At his funeral our Seminary Chapel was filled.  I had never till then, or since, seen so many tears shed at the funeral of a priest as I did at his funeral.  Even though he was “pruned” he was still firmly attached to “the vine” and he truly did provide “abundant fruit”.

Jesus was so right in what He said!