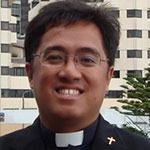 There was a company, which was working in the forest and looking for a woodchopper. One day, two woodchoppers applied for the job. The manager said that they would only accept one. So he invited both of them to a test. The manager would give them two hours to chop as much wood as they could and the person who chopped more would get the job. So both of them got to work immediately and after two hours, the one who won the job chopped 20 per cent more than the other guys. When the loser asked him what was his secret he said, “It’s simple, every 30 minutes, I take a five minute break to rest my muscles and also I take time to grind my axe a bit so that it doesn’t get dull.” The other guy said, “I should have done that, I went on chopping for two hours without any rest”.

In the gospel for today, which is a continuation from last week, the apostles whom Jesus sent out two by two to go to villages; proclaiming the good news, healing the sick and expelling evil spirits have come back and are eager to tell to Jesus their experience. However, Jesus noticed that they were tired and they would need some time to rest. So they decided to go to a deserted place so that they could be by themselves.

For many of us, we live in a life that is 24/7. In the old days, life was very simple, you woke up in the morning, went to work for the day and went home at night and enjoyed the weekend with family and friends. However, with the advance of communication technologies like e-mails, mobile phones, social media like Facebook, Twitter and Instagram, it is so difficult to be in a “deserted place” and have time for ourselves. We are being constantly bombarded by emails and text messages from work even if it is our day-off and things that demand our attention even if it is already late at night. And during the time of Jesus, he realised the need to take some rest.

Sadly nowadays, it is a luxury to have time out for ourselves. One time, I had finished giving a week-long retreat to some members of the SVD and the Holy Spirit Sisters; it was a nice time to be in silence, no TV, no radio, and just have time for ourselves, some doing journal writing about their past experiences, some going outside for a walk and communing with nature or some just wanted to have a much needed rest from all the demands of their jobs. Could we also take some time out for ourselves too? Maybe just go to a nearby park, get a camera and click some shots; maybe (for those who are not subject to current COVID lockdown restrictions in parts of Australia) go to a mall and do some window shopping or watch a movie; maybe even just going out for that much needed time to be with your wife or husband or loved one or close friend. Jesus knew that we needed those so why not do that some time.

One of the things that we need in life in order to survive is food. And when in the gospel for today, Jesus saw how many people were longing for his words, instead of driving them away because he needed to have time with his disciples, he was overcome with compassion and taught them at some length.

Now, more than ever, there’s such a thirst for the Word of God. In the SVD, we’re experiencing people wanting to know the Bible better. Even with the pandemic among us, we have two Bible study groups that are continuing with sessions through ZOOM. There are more people nowadays who wanted to be fed by the word of God. My friend, Br Kieran Fein of the Marist Brothers once told me that people who go to Mass are being fed from two tables, the Table of the Word and the Table of the Eucharist. And this is the challenge for priests that in our Masses, it is not enough to feed people from the Table of the Eucharist, the people also deserve to be fed from the Table of the Word and this could only be done by giving due importance to the Word of God by its proclamation and by its interpretation for daily life. We are also challenged by this call, we as people of God should also seek refreshment through the Word of God, either by reading the Bible and also being attentive at Mass especially during the Liturgy of the Word.

The gospel for today tells us how Jesus would reach out, make his way for us so that our needs could be met. The only thing that we have to do is to grab this opportunity with both hands and to take this advantage of being nurtured by Jesus through his word.